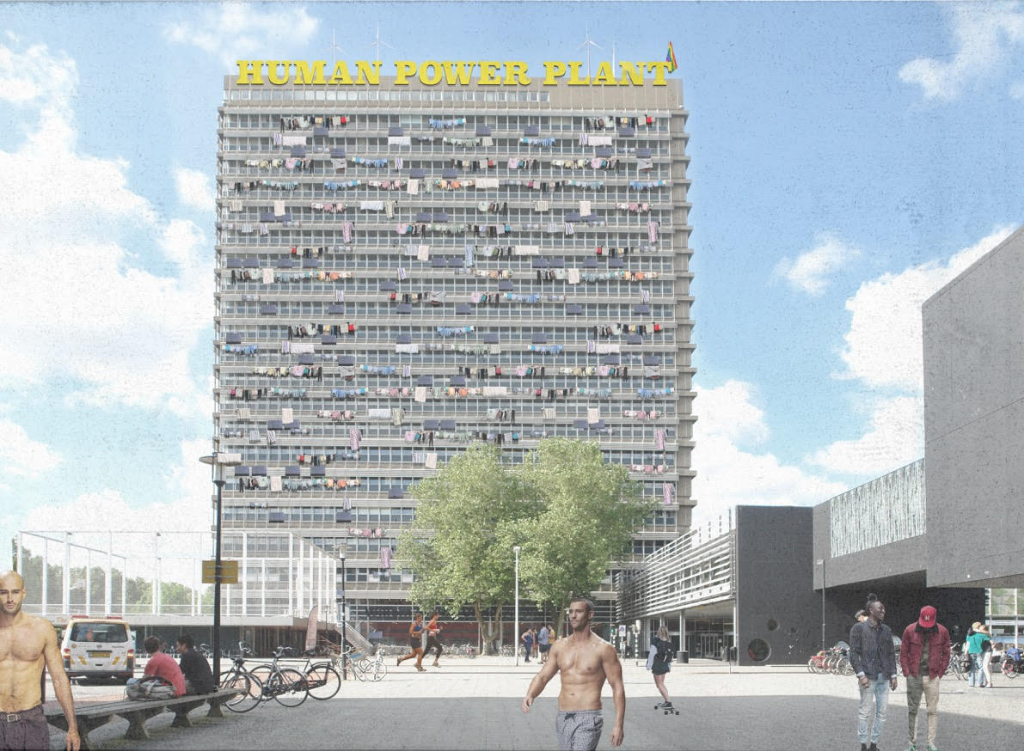 Human Power Plant is an artistic research project into a human powered society. Every project starts with a site specific human power scenario. The scenario is the basis for prototyping human power plants to engage the community. The first scenario was a student housing building on the University Campus of Utrecht. The second scenario was a dredging colony projected in the former peet mining wetlands in Friesland. The third scenario is the House of the Future in the densely populated residential area Bospolder Tussendijken in Rotterdam.

Why human power?
Unlike solar and wind energy, human power is always available, no matter the season or time of day. Unlike solar panels, wind turbines, and batteries, humans don’t need to be manufactured in a factory. Unlike all other power sources, human power increases as the human population grows. Making human power the benchmark for our energy suply and consumption is the most sustainable energy source on earth.

The Utrecht Science park wants to become a sustainable campus, but also expand with student housing, brainparks, research labs, and new hospitals. The Human Power Plant seized the opportunity and developed a scenario in which the 22-story vacant Van Unnik building is transformed into a student house with 750 rooms. The building is completely independent of fossil fuels – all energy is supplied by the students themselves.

Scenario
The students limit their energy consumption by jointly organizing household tasks and by using energy-efficient technology. This includes both high-tech (such as LED lighting) and low-tech (such as thermal underwear). Three floors are occupied by a gym where all students produce electricity and heat for a few hours a day. Human waste and kitchen waste are converted into biogas for cooking.

Prototype
The Human Power Plant is an off-the-grid renewable energy source that produces electricity, compressed air, and water under pressure. This was a miniature version of the one needed to suply the 22 levels of the van Unnik student building. Students could test their energy production and endurance. All the fitness machines had a unique sound when students worked out. Consequently, each time the Human Power Plant is operated, a work song was composed. The installation was further develloped and exhibited in Deventer, Antwerpen, Rotterdam, and Groningen.

For the second scenario, the Human Power Plant headed to Friesland. The debate on energy transition mainly focuses on domestic energy consumption and transport. Industry and infrastructure are hardly discussed. In Drachten, we therefore put the dredging industry under the magnifying glass. For centuries, the Netherlands was dredged by hand. Today, this essential maintenance of the landscape is entirely dependent on fossil fuels. The Friesian landschape was excavated by hand for the peet mining. This handmade landscape is still in tact and can be the blue print for the Netherlands for a human powered dredging system.

Scenario
The Frisian landscape, after centuries of reclamation, has been transformed into a Mangrove Forest, accessed by a canal network connecting small settlements on artificial mounds. The waterways are maintained by a colony of dredgers who, in exchange for maintaining a stretch of canal, have a home in the wilderness. The wilderness is a spectacular natural area for nature loving tourists to camp, fish, and canoe. The Dredging Colony is organized according to the Frisian tradition of co-opting. Together they set the price of firewood, fishing, and camping. The flagship of the coorperation is t’Juffertje, a human powered dredger to keep the deeper channels navigable.

Prototype
We organized an experiment in which 1 m3 of mud was removed from a canal in the traditional manner. Based on this, we calculated that about 800 people could keep the province of Friesland navigable. Because the local residents showed no interest, we found dredgers in the asylum seekers’ center. Manual dredging is not financially viable, so we give asylum seekers a piece of land next to the piece of canal they maintain.

Bospolder-Tussendijken was once built for dockworkers in the Rotterdam harbor. The neighborhood is largely comprised of social housing and has been selected as one of the testing grounds for the energy transition: All households will be connected to a heat grid in the harbor. This system requires a huge investment in infrastructure and wil stay dependent on the heat supply of the industry. The Human Power Plant developed a scenario for the neighborhood in which energy production relies entirely on locally available resources: manpower and biomass, supplemented by wind and solar power when weather conditions are favorable.

Scenario
In the climate-neutral BoTu, all household tasks are organized communally. Neighborhood squares have become commons, equipped with public kitchens, canteens, bathhouses, washrooms and toilets. All common facilities are under collective management. Residents have a few days of energy statute labour and thus work only half of the week in the regular economy. Yet the residents purchasing power has increased because they do not pay for the neighborhood facilities. Food and firewood are produced within the neighborhood, minimizing the need to import. Energy consumption has fallen radically, but well-being has increased just as spectacularly.

Prototype
The House of the Future: BoTu on Human Power is a workshop for residents, artists and professionals to prepare for the energy transition on human power; The most sustainable energy source available. Two or three times a year we organize an Energy Agora: a mini-festival around the energy needs in everyday life such as cooking, heating, washing, dressing.

HPP – House of the Future

Resuscitation of a hole in the city.

A souvenir shop sells washed up waste from the Atlantic in handmade packaging to cruise ship tourists.

A travel guide, cultural criticism and picaresque novel in one, examining the significance of the highway with regards to the Netherlands.