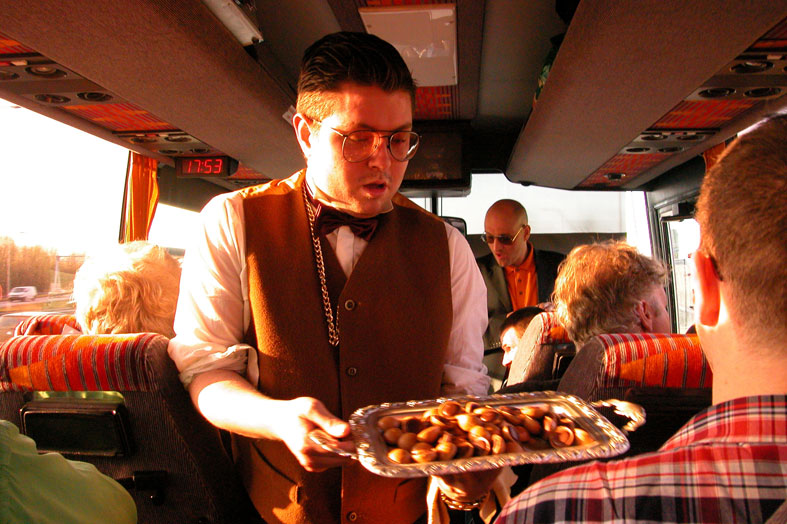 P-travel agency (P-reizen) organised day trips and overnight expeditions to the ‘Parallel World’: the ‘footloose’ landscape of industrial zones, districenters, harbours, shopping malls and airports, for which the highway serves as a backbone. The parallel world is a spectacular landscape right in front of us, but still a destination other tour operators won’t talk about.

Artist collective G.A.N.G.’s set up the travel agency to offer the audience a genuine footloose experience.

“The city has stretched thin. For functions such as living, working and recreation we cover ever greater distances through a landscape that is silting up unnoticed with mobility systems and uniform mono functional zoning. Places become interchangeable since the activities we undertake are independent of a location. We’re moving into the parallel world in which old places lose their meaning but new footloose places of interchangeable meaning arise.”

The travel agency offered a wide variation of guided tours through the Netherlands from 2001 till 2005.

P-travel organised a trip for the Festival of Delights (Heerlijkheidsfestival) in Hoogvliet. Hoogvliet is a residential neighbourhood of Rotterdam and is situated in the heart of Holland’s most spectacular footloose landscape, the Botlek harbour. This heavy industrial area houses the largest oil refineries and is the biggest container hub of Northwest Europe. The trip guided the guests through this ever-changing environment where nothing is what it seems, as what might have been a functioning road yesterday, could be part of the harbour tomorrow.

The Netherlands has a very strict urban and landscape policy where public space is carefully protected from exclusion. The rise of the parallel world underminded this value. For example the gated community as a form of segregation does exist in the Netherlands. It’s subtile in design so the gate and walls are less aparant. In collaboration with Flakland studio, P Travels organised a day trip visiting vararities of Dutch gated communities. From a upmarket residential tower in the city, to holliday home parks, elderly homes estate, and squater communities.

Next to the canalised river Oude IJssel is the largest antique-selling street of Europe, where all sorts of antique dealers set up shop in former farms and factories. These ‘nostalgia farmers’ have stretched the term ‘antique’ to an unprecedented scope. Things don’t even have to be old to be sold as ‘antique’: new antiques are brought in from China by container.

P-travel proclaimed during the manifestation “Archipuncturale” to rebrand the Achterhoek area to ‘t Land van Oer. With a newly designed map of the area solely focused on antiques, P-reizen organised a full arrangement day trip through ‘t Land van Oer to learn about contemporary nostalgia.

P-travel opened its first travel agency in the heart of Amsterdam, at the Ruysdaelkade between the Rijksmuseum and the Heineken experience. Here tourists could book a day trip to the real Amsterdam. Destinations: Schiphol airport or just a circle city tour on the A10 highway.

P-travels set up a studio in a mobile home. For two weeks the camper van drove around the Netherlands in search of the Parallel frontier. The studio was visited by the Dutch television program Markant Nederland. An international group of art students joined the studio for a workshop by KaAP (ArtEZ). The student team did extensive fieldwork for new P travel locations.

P-travel organised a hiking tour to the VINEX suburbs of The Hague. This designed urban expansion  has a repetitive grid of housing, streets and canals. . The old landscape is wiped off the face of the earth. After a whole day of walking, the neighbourhoods form a never-ending labyrinth. To escape the future, the only way out is through the water ways, remnants of the old landscape.

The economic boom of the nineties caused a vast increase of real estate development in brain parks. Within the context of the Day of Architecture in Hilversum, P-travel organised a tour per luna park train over the local business area. During the ride, the sales brochures that once promoted these offices were read to the visitors in the train.

P-travel designed a tour for Stroom Art Center through the indoortainment of outdoor experiences in and around The Hague. This phenomena popped up in every industrial area where industrial barns were transformed into tropical swimming pools, cart race tracks, paintball arena’s, etc. In these make-believe worlds people train for all kinds of adventures they will probably never actually experience. P-travellers were offered a once-in-a-lifetime opportunity to visit all parallel worlds in just one day, from the highest mountain to the deepest ocean.

P-reizen was invited by the Amsterdam Fund for Visual Arts to make a future vision for Amstelland. Amstelland is a green lobe that runs like a finger to the southern edge of Amsterdam, but is intersected by the A9 motorway. The ‘dyke’ on which the highway is located has a height of approximately 6 metres and a width of about 40 metres. The plateau turned into a forest over the years and became the setting for raunchy rendezvous, illegal motocross, and features numerous voodoo-like objects for target practice with bow and arrow. On Saturday 21 June 2003, P-reizen opened the ‘Forest Show A9’ here, the first parallel world forest in Europe. Visitors could follow the signs and enjoy a spectacular view over the A9 at the end of the tour.

P-travel set up a base camp in the industrial park De Nieuwgraaf in collaboration with the Academie Bouwkunst Arnhem (University of Architecture). P-travel made participants stay an entire week and organised day and night expeditions to the De Nieuwgraaf alongside the A12 highway. Its mission was to research the potential of ‘industrial parks’ as a new format in urban design.

The Flevopolder is a man-made polder at the southern end of the South Sea (Zuiderzee) that was to become industrial farmland. Now, half a century later, the planned villages have expanded into large suburban developments. The settlers seek for authenticity in this rational planned landscape. P-travels organised a day trip to the newborn historic places in the Flevopolder, like Batavia City (Batavia Stad),  Prehistoric village Swifterband, and Almere castle.

P-travel’s first tour set out for the Leisure society alongside highway A12 where leisure landscape of indoor playgrounds, shoppingmalls, gated communities, gay meeting spots, and luna parks had emerged. The bus trip ended in Kernwasserwunderland, where scrap dealer and luna park developer Hennie van de Most turned a former nuclear plant into a playground.