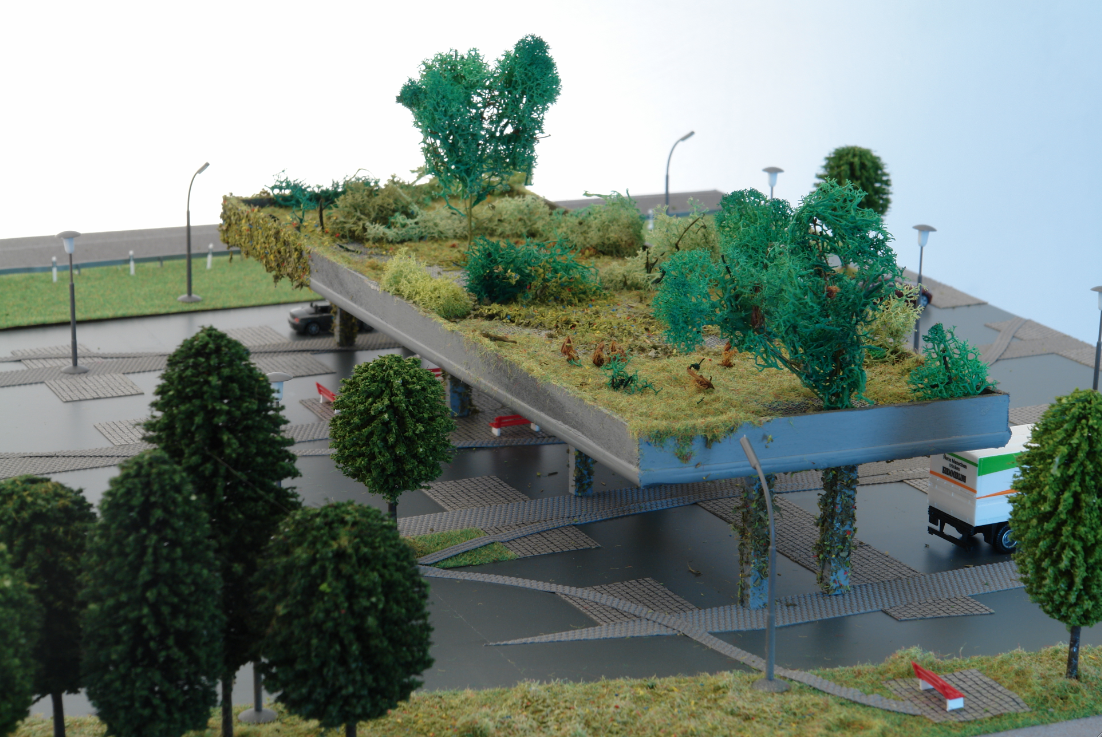 At the request of the province of Overijssel, Kunstenlab and AkkuH wrote out two spatial design assignments in the A1 zone: the rest area the Boermark’ and the parking transferium Holten. Multidisciplinary design teams were formed around the two design assignments. The results were shown in the exhibition ‘Pass on the right’.

The highway infrastructure is the largest monument in the Netherlands, with its own aesthetic dictated by functionality. The design is a consequence of rules, standards, and rationalised structure: the whole system must be understandable even at 120 km per hour. The functionality of the rest area Boermark corresponds to the so-called ‘lower fundamental need’ according to Maslow’s pyramid: shelter, water and defecation. This design proposal follows the spatial policy, the building regulations and the visual language of the immediate surroundings: the highway.

Rest areas in the Netherlands are usually named after things in the vicinity. The name P-11 is not romantic, does not refer to a false relationship with the hinterland, but calls the place for what it is: the eleventh service area on the A1/E30, counting from Amsterdam. The myth of the hinterland is not to be found beside the road, but on the road with Duisburg, Minsk and Moscow. The eastern route of the E30 (all the way to the Omsk ring road) is projected on the parking lot as an informal path, a playful element within the rational framework.

The need for shelter and for a toilet facility is provided by the folly with a toilet building underneath. The folly refers to the gasoline pump roof. Both are archetypal buildings, stripped of their commercial trappings. Functionless and overgrown with what the wind blows off the trucks. The roof is arranged as a highway arboretum showing the species diversity of this transportation corridor.

The parking at P11 is designed with so-called ‘trunk parking’, is a new parking layout where the resting motorist has a private balcony on the parking lot as an extension of the personal space.

Testing the highway as a new public domain.

Re-learned how to see, not with your eyes but with your ears. Blind people from Rotterdam guided Smets blindfolded through the city.